Nafi Takes silver at the 2019 IAAF World Championships in Doha

It had been a difficult year for Nafi. She had to catch up all year after a calf tear slowed her down in early January. After that, an elbow injury caused more worry, as well as sore tendons following her exploit at the IAAF Combined Events Challenge meeting in Talence, France. However, Nafi kept working hard and always believed she could medal in Doha. Winning a silver medal, to add to her other Olympic, world and European medals, means the world to Nafi.

Here’s a really nice report of the women’s heptathlon at the 2019 IAAF World championships (by World Athletics):

Johnson-Thompson started her quest for gold with a stylish performance in the 100m hurdles. Hacking 0.20 from her previous lifetime best, she crossed the line first in heat two in 13.09 to sit fifth overall.

In that same heat, Thiam produced a solid effort, clocking 13.36 to equal her season’s best sit 10th after the first event.

Johnson-Thompson retained her 40-point advantage over Thiam as the pair dominated a high-class high jump, both equalling the championship heptathlon best of 1.95m.

Boasting world-class PBs of 2.02m (Thiam) and 1.98m (Johnson-Thompson), the ‘big two’ were expected to dominate but the Briton will be delighted to have kept the world, Olympic and European champion at arm’s length.

Both athletes suffered the odd blip but successfully navigated a route through to 1.92m. The 1.84m tall Thiam then squeezed on the pressure with an emphatic first-time clearance at 1.92m. However, Johnson-Thompson responded and gave a fist pump of satisfaction following a successful second-time clearance at the height.

Operating a much shorter run up than the languid Thiam, the Briton then struck the first blow at 1.95m, soaring over the bar with her first attempt. Thiam hit back with a second-time clearance – as both matched the championship heptathlon best height which Thiam, Yorgelis Rodriguez and Carolina Kluft have all previously cleared.

Thiam probably mustered the better efforts at 1.98m but the height was beyond the lead duo as Johnson-Thompson ended the event in first overall from Thiam in second.

Given Thiam’s formidable shot PB of 15.52m compared to Johnson-Thompson’s best of 13.15m, the Belgian always expected to assume control of the overall standings after the third discipline; the question was by how much?

In round one Thiam gave a clear demonstration of her intentions, launching the metal orb out to 15.22m while her rival and world indoor pentathlon champion could only register 12.33m.

In round two the Briton improved – but only by five centimetres to 12.38m – and exited the shot circle shaking her head in frustration. Thiam, an elegant shot exponent, could not improve on her excellent first-round effort with 14.52m in the second stanza.

However, Johnson-Thompson produced what could prove a pivotal moment in this heavyweight combined events showdown by smashing the shot out to a huge PB in round three of 13.86m. When confirmation was received of the distance, she jumped up and down in jubilation as she celebrated the significance of the put. Thiam heaved the shot to 15.08m in the final round but no improvement.

Thiam now had overall leadership, but the Briton was sat just 51 points adrift – a much better scenario than it could have been before that blockbuster final effort.

Going in the first of three 200m heats, Thiam claimed the win in a solid 24.60 – 0.24 down on her lifetime best. She came off the curve with a clear advantage and maintained her lead to the line, although she appeared to be blowing heavily at the end of a gruelling first day in which she accumulated 4042 points.

Running in the third and final heat, Johnson-Thompson also produced a solid effort; winning the race in 23.08 (1.0m/s) – the joint sixth best performance of her career over the distance. It brought the Briton’s four-event total to 4138.

Only Jackie Joyner-Kersee (4367), Carolina Kluft (4162) and Jessica Ennis-Hill (4158) have ever accrued a higher points total at this stage of a heptathlon.

Thiam was satisfied with her efforts. “It was a good first day, I did not make any mistakes. The hurdles were good, the shot was good, the 200m and the high jump was a good result. I am not trying to pay too much attention on the duel with Katarina. I just want to concentrate on what I am doing.”

Opening with the long jump – on a day which very much showcased the multi-events – the “big two” looked distinctly unimpressed after relatively modest first round efforts of 6.25m and 6.32m.

The Belgian slightly improved to 6.35m with her second attempt but Johnson-Thompson dealt a huge uppercut to her gold medal rival by soaring out to 6.77m for 1095pts.

It was her finest ever jump in a heptathlon and in the context of the seven-discipline war of attrition – a pivotal moment.

In round three, Thiam clawed back some extra points with a 6.40m (975pts) jump – but not what she desired. The Briton finished with a red flag but thanks to her mighty second jump (within 16cm of her lifetime best) she had cracked open a 216pt lead as 5233pts plays 5017pts

Gold for Johnson-Thompson was all but assured in the javelin. The British athlete opened with a highly satisfactory 42.21m before adding 1.01m on to her lifetime best with a second round 43.93m.

Thiam, meanwhile, throwing with heavy strapping on her right elbow, never looked totally comfortable. She followed a first round foul with a 48.04m throw – which was still more than 11 metres down her PB. Clearly struggling she passed her final attempt.

Leading into the 800m – Johnson-Thompson had one hand on gold holding a comfortable 137pt advantage on the Belgian – which equates to around nine seconds.

More realistically the 800m was all about whether the Briton could better Jessica Ennis-Hill’s British record of 6955pts with a time of around 2:09 required, or even potentially running a 2:06 which would enable the world indoor pentathlon champion to bust through the magical 7000pts barrier.

Down the home stretch Johnson-Thompson veered out to lane two forged ahead to the front and took the bell in a time of 63.14 – on track to achieve her twin targets.

For the remainder of the race, Johnson-Thompson slowly extended her advantage on the field and pushed on down the home straight to the roars of the hugely appreciative fans and sizeable British contingent.

Crossing the line in 2:07.27 for a 0.37 personal best she added 1005pts to her score to erase Ennis Hill’s seven-year-old British record figures before, overcome with emotion, she burst into tears. 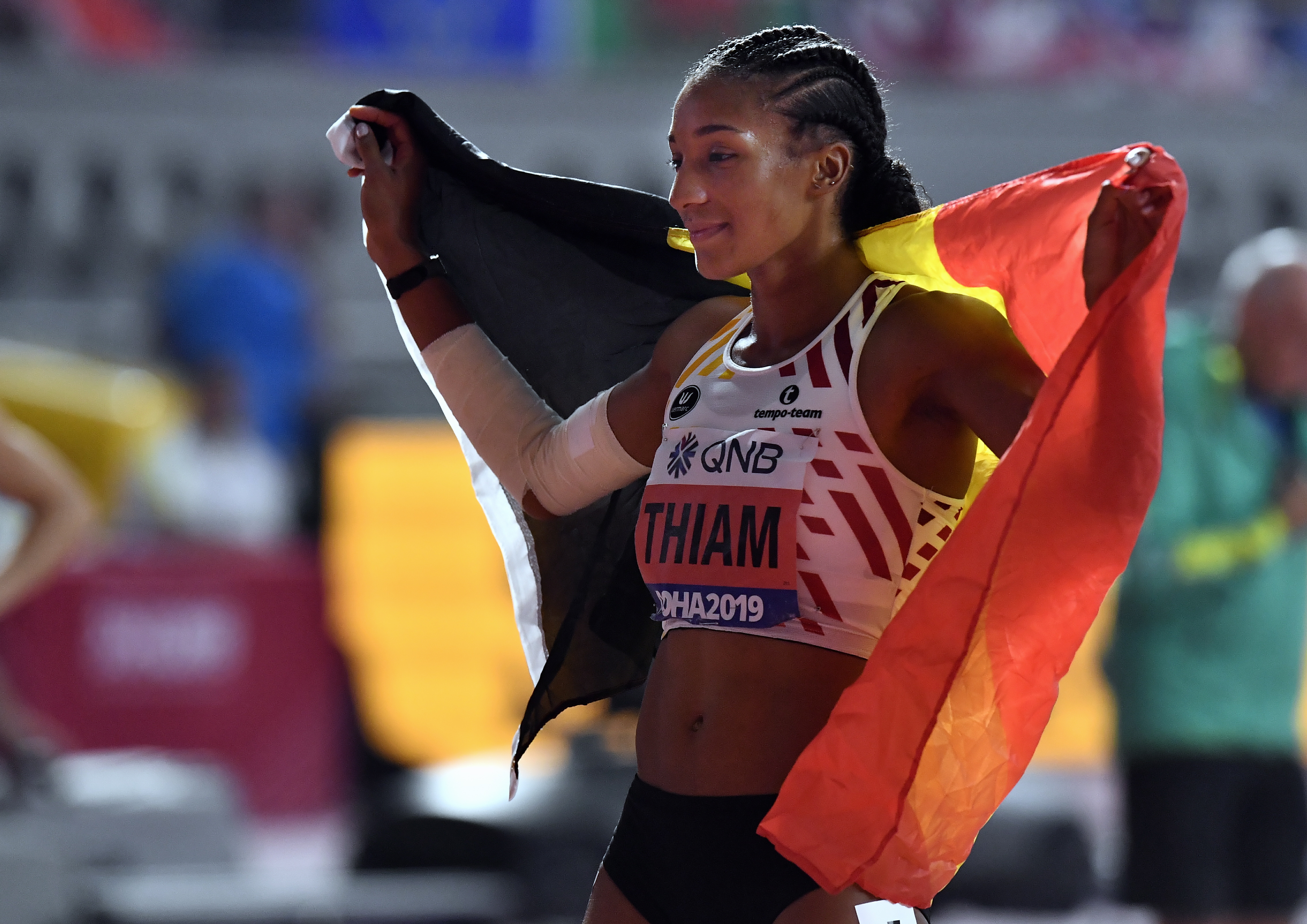